Some of the cool stuff I saw last week at Siggraph 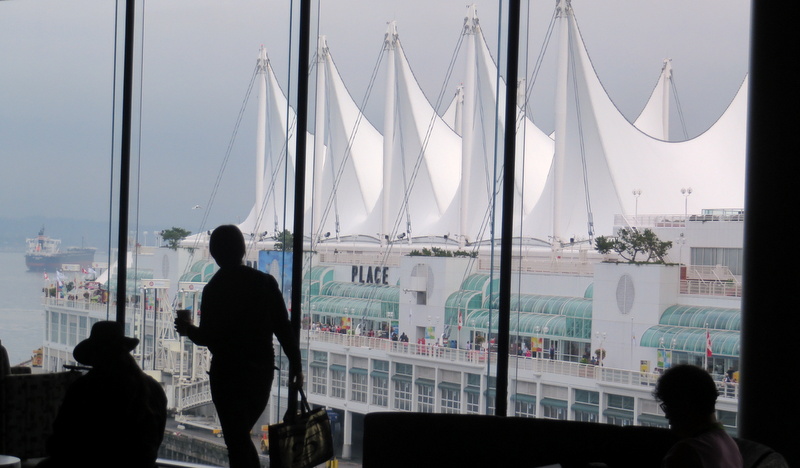 Siggraph is the annual computer graphics show, and last week it was in Vancouver, Canada -- about a 1.5-hour drive from my home. When in Vancouver, the show tends to be smaller, as American vendors and visitors find it inconvenient travelling to a foreign country. (One New York editor complained to me that she couldn't find a direct flight to here, and that the flights were long; I responded that I endure that with almost all my trips the USA.) Indeed, I saw no coverage of Siggraph in the mainstream tech media.

Now, "computer graphics" at Siggraph refers the hardware and software that generate movies and games; it doesn't really encompass CAD, except peripherally. And so it's a stretch for me to find stuff to which my readers can relate. Nevertheless, 13 vendors invited me to meet with them over two days, and here is some of what I found. (I report more on Siggraph in my upFront.eZine newsletter today.)

Three years ago at Siggraph 2011, the vendors and their analyst enablers were gaga over the prospect of the juicy profits they anticipating savoring: entertainment was going from 2D to all-3D, and so there were new 3D tvs to be sold, 3D production techniques to ramp up, 3D-producing hardware and software to be marketed -- at much higher costs, naturally, because 3D is more more than 2D.

This did not occur, particularly. Consumers had just finished their upgrades from CRT to LCD tvs, and so weren't in the mood for another splurge. Plus, wearing those 3D glasses looked so dumb. No 3D gold rush.

So while there still was 3D at this year's show, the bigger story was mobile, which I report on in upFront.eZine. Here are some of the most interesting other things I experienced at Siggraph: 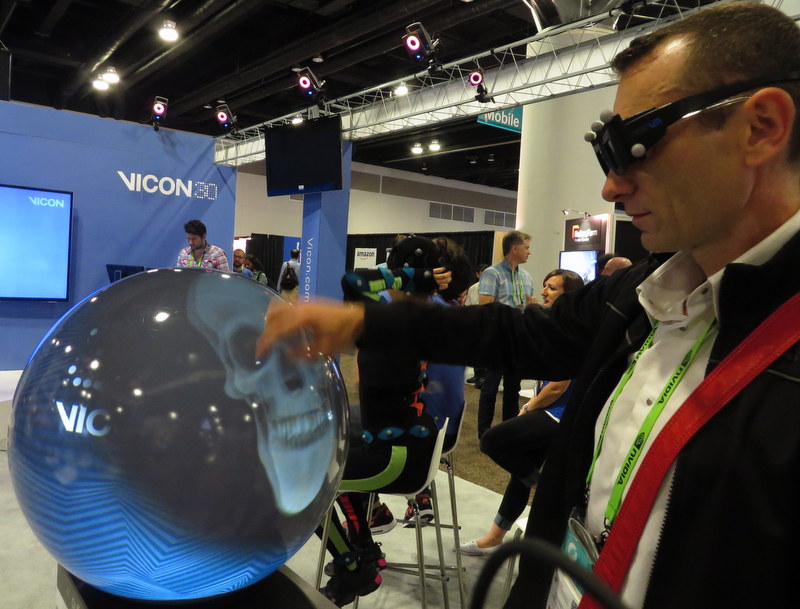 Putterfish is an interactive 3D viewer that looks like a fortune teller's crystal ball. It consists of a sphere about 1.5 feet in diameter that sits on a mammoth computer case. Its surface is touch sensitive; projectors inside the sphere project 3D images; infra-red sensors (made by Viecon) are mounted high on walls and sense motion; and you wear Viecon's 3D glasses with small white balls that the sensors track.

You put on the polarizing glasses to see the model in 3D; nothing new there. As you touch the surface, however, you manipulate the 3D model (rotating and zooming it). As you walk around the sphere, the model rotates with you. A larger version is available as an inflatable ball. The multi-user version dispenses with the touch interface; users wear the googles and walk around the sphere. The system needed two computers (or was it three?) to generate the imagery and control the cameras.

Even crazier, another booth offered the same idea, but using external projectors displaying images on a white cube, which are seen in 3D using the mandatory polarizing glasses. I did not have the opportunity to test it out.

I had a preview of Thinkbox's point cloud processing software last year at Siggraph; this year it is announced, and next year it ships. Thinkbox wants to be the biggest, fastest processor of point cloud data for the CAD industry, and they spent a whole year talking to people who work with such data, before starting to program. Which means the software has some pretty nice functions

The Sequoia engine is based on their particle physics code that generates artificial water, clouds, sand, and other effects for movies and games. Nevertheless, they claim that Sequoia is capable of the following:

The points can be meshed; colors are captured, if recorded; 360-degree photos can be applied as textures. ThinkBox is working on mesh editing so that 3D printing is more reliable (like thickening walls, closing holes).

While they had a computer the size of large suitcase powering the demo, they claim the software runs on portable devices, like Microsoft's Surface Pro tablet. The number of points that can be handled is greatly reduced, of course, like down to 50 million, and processing is slower.

On Wednesday morning of Siggraph, AMD sponsored a tour of Vancouver Film School, whose brand-new, 250,000-sq ft campus is located just ten walking minutes from the ocean-front Vancouver Convention Center. The for-profit school offers one-year programs that focus on outcomes: animation, make-up, stage building, filming, and so on. For instance, students in gaming have to produce one level of a computer game, those in animation a three-minute animation. New classes begin every two months, and teaching is updated as quickly as technology matures. 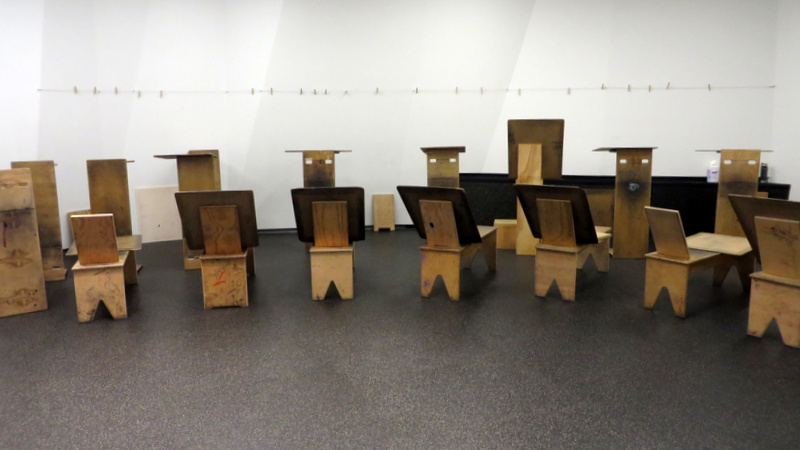 Not just digital: the VFS classroom in which live models are hand-sketched

Managing director Marty Hasselbach told us VFS has 775 identical HP Z420 workstations, which recently replaced Z400s. (HP, because Dell a number of years ago dropped the ball on support.) Each is equipped with an AMD FirePro W7000 graphics board and two monitors. (AMD, because the school found them faster than equivalent boards from nVidia.) The new location and the six satellite campuses are connected with fiber networking. The school does not want its paying student to have to wait. 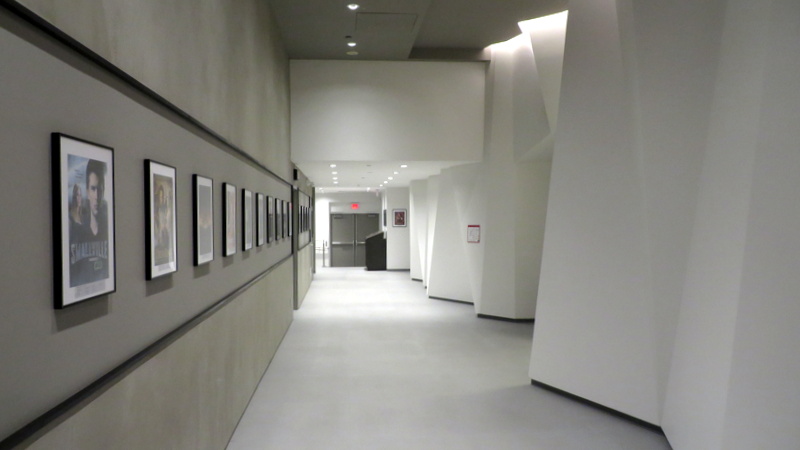 Posted at 01:37 AM in Travelogues | Permalink