« In upFront.eZine this week: who is CCE and why is their software free? | Main | First Look: YouTubing Inside Solid Edge ST 6 »

Can we believe "Giant corporation stole my idea" pleas?

They are heart-tugging stories, where an inventor approaches a large corporation with his idea, only to see it "stolen" and marketed by the giant corp (and its deep legal pockets) as its own. While a story today in Israeli business newspaper Globe carries the headline of Architect Eli Attia: Google stole my life's work, the story may well be different.

Last week, we learned that Google X spun off Genie to Vannevar Technology, a company that some media outlets quickly anointed as "a technology that could earn the company $120 billion a year." See http://www.globes.co.il/serveen/globes/docview.asp?did=1000886261. On Twitter, I immediately scoffed at the revenue number, after seeing how the new company's Web site is as exciting as a fog bank. (Reality check: Google itself makes only $50 billion a year.)

From a future $120-billion-a-year corporation, this is all we get for a Web site

Today, the fog bank lifts partially, as reader Rick Feineis alerts us to the plight of architect Eli Attia who says he invented the technology as his life's work, presented it to Google, only to have Google X and Vannevar take the idea as their own.

Mr Attia has begun a Web page to provide more information, with the title Google & Me, of which he says "Title inspired by Michael Moore" [koff, koff]. The site is badly designed, hard to read due to its use of frames (who uses frames anymore?), but it it he admits Google X offered him 15%, which he turned down. Later, he was pushed out of the Genie project, after which Google X offered to arbitrate. He says that Google executives has so far ignored his direct letters to them. 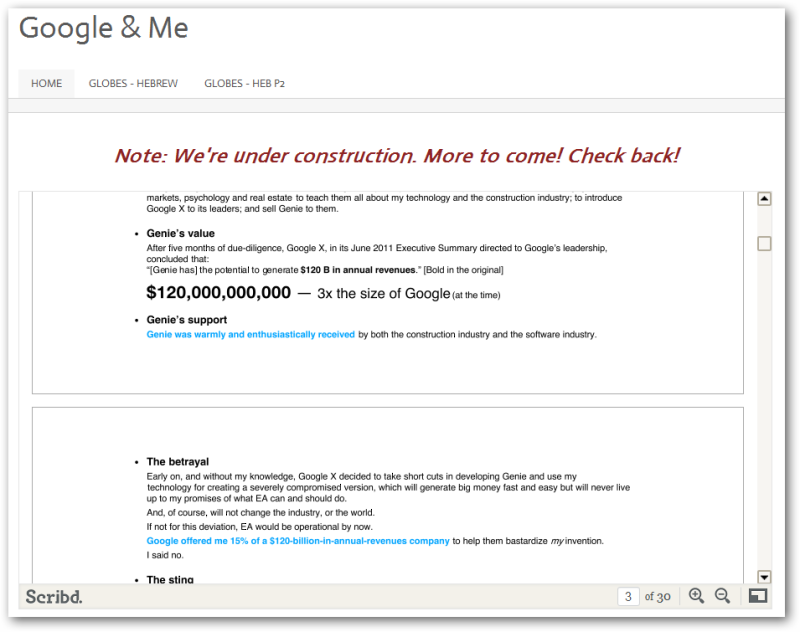