Well, here we are at Autodesk press day, one day before the launch of Autodesk University 2013 in Las Vegas. I'm not sure how much I'll be able to report, but we are due to start things off in a few minutes 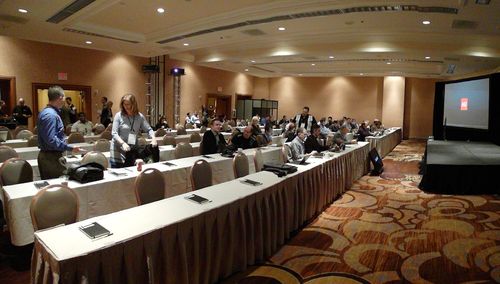 The media fills the room, while an empty stage faces us.

We must be close to starting, the uplifting video has begun to run on the giant screens in front of us. In the video, a guy just kissed in minature giraffe. CAD?

Greg Eden is Autodesk head of global public relations, and he is starting things off. The experience word gets used. 85 media from 13 countries, and 8000+ attendees to AU. By the way, Autodesk covered some of my travel expenses. Mr Eden is promising some hard product news. 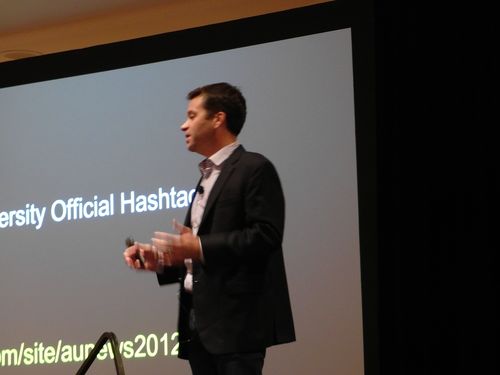 First speaker is Andrew Anagnost, svp of industry strategy and marketing. Here he is speaking on the cloud: How we are creating new value on the cloud.' 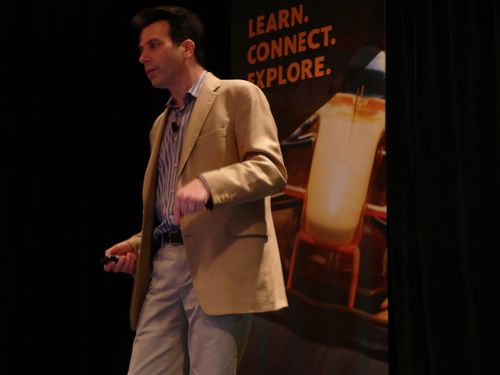 We are hearing success stories of firms who are happy they bought suites of software from Autodesk. the math is remarkable: 'We are making more money off them, even though they are paying us less money.' The EU ought to look into this! He is running through lots of stats, too quickly for me to record them.

Autodesk FormIt runs on iPads, and lets architects conceptually see what a building looks like on a site photo. See photo below. It has the advantage over SketchIt by having BIM data. Project Mercury is infrastructure design on the cloud. It handles very large projects, and displays plans on iPads.

Tomorrow an announcement will be made regarding new manufacturing software.

How does this affect the channel, someone wants to know. Mr Anagnost agrees that most things are sold directly, but Autodesk wants to get this cloud stuff happening smoothly before handing it over to resellers.

Someone wants to know how many of the 360 customers were there before 360 launched? Mr Anagnost isn't sure, other than the number of customers accelerated since the launch of 360. Admits customers are not using up their free allotment of cloud usage.

Jon Pittman is vp of corporate strategy. He is new to me, even though he has been at Autodesk 17 years. He wants to talk about AU, but starts off with a history of Autodesk -- automating the drafting table story. The phrase he repeats is, This is not your father's Autodesk. Well, my dad never did Autodesk. 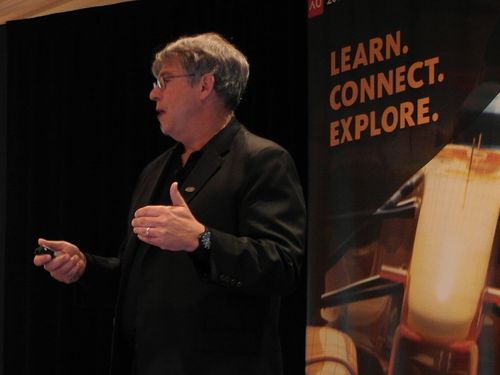 [A bug in Chrome means I cannot use quottion marks, parentheses, and some other punctuation marks in this blog. One workaroud is to type the ! in another program, and then copy and paste it into TypePad here.]

Innovation Forums is about the future of design, and they are holding some 90-minute sessions tomorrow at AU, at which we media is scheduled to attend. First session will be -- you guessed it -- on the cloud. Design Awards at the end of the day, tomorrow. 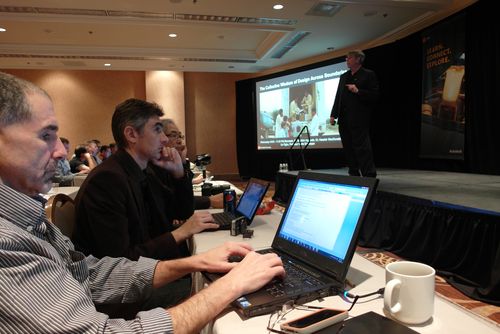 The media hard at work during press day

Time for a break; two more hours to go! Back soon...

Next up, Mary Hope McQuiston is director of marketing and business development at Autodesk's consumer group. She wants to talk about consumer trends. Is this Autodesk's conter to Monica Menghini? 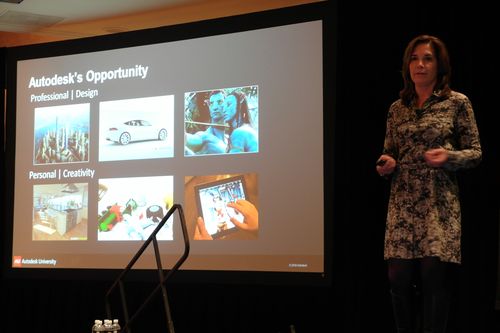 She is saying that it used to be that corporations and governments used to adopt tech first, but now consumers are. I dunno about that. I seem to recall use consumers being the first to adopt PCs already in the mid-1980s. Anyhow, corporations like Autodesk need to understand where consumers are leading.

Trends she is watching:

Autodesk has 12 million professional customers, more than any competitor. Now, with their collection of consumer software, they have 95 million. I wonder how many come from SocialCAM, whose numbers has fallen 83 per cent since June, from 83 million to 4 million [Autodesk bought the company in August.]

We are now getting an overview of their consumer software. In the last six months, SocialCAM has been downloaded 20 million times. But as Cristina Cordova reminds us, downloads does not equal users. See http://cristinajcordova.com/

The final point she wants to make that every professional is a consumer. Autodesk sees this as a way to get a deeper relationship with its pro users, such as through Instructables.

Everyone deserves to be creative, she concludes.

An industry analyst is asking if Mary Hope McQuiston sees consumers as a source of revenue. Most of Autodesk's consumer apps are free or 99, with one at 59 dollars -- as opposed to thousands of dollars as for the pro software. She thinks there is a great opportunity, but today Autodesk is just learning about the market. She hopes to make money by

Asked who their direct competitor is, she said here is no one company as their competitor, considering the range of Autodesk software.

Someone asks how Autodesk can educate users about which software will last, and which won't have longevity. I don't think we got an answer?

One media guys notes that there seems to be a concentration in quantity, not quality, in the social apps Autodesk is acquring. I know this person, and that he is speaking of SocialCAM ,which on Twitter he calls 'shite software.' Autodesk, she relies, is looking for apps that the masses are interested in. But more than that, Autodesk is looking for engagement with consumers. I wonder if engagement means distributing software as a loss leader to get customers buying more expensive software, eventually.

How are other divisions using SocialCAM? SocialCAM was an addition to Autodesk's sketch and photo apps; she thinks there might be a place for SocialCAM in other areas.

We are seeing a photo of a stove that burns twigs and generates electricity through a USB port that was used after Hurricane Sandy by New Yorkers to recharge their iPhones. But, asks one person, how environmentally friendly are wood-burning stoves? The stove is meant for cooking, not heating homes.

Up next is the chief financial officer, Mark Hawkins. He is giving us some the numbers we heard earlier, such as 12 million pro users, 50 millions students 'having access to our software,' 95 million total consumer users. The 95M number is 'growing exponentially.' These are the numbers he starts with. 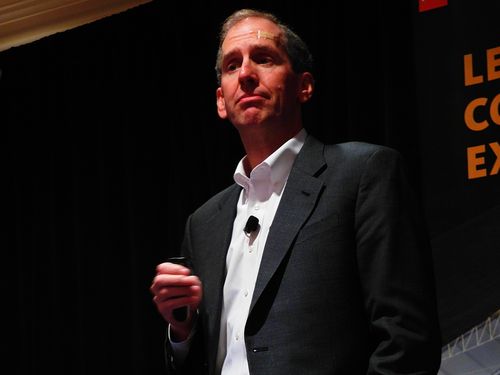 Mr Hawkins is asked again, how will Autodesk make money from consumer apps and the cloud. He says Autodesk makes money from the cloud through the subscription fees. He says the consumer group is making money today, but gives no figures. He also figures he'll make money from advertising from 95 million app users, and this will be a significant revenue stream in the future.

What challenges are you facing, because at these events you tend to paint a rosey picture. He says there is the economic environment, the changes they made to their sales forces, and there are other things to work out.

Ten years from now, we will see how the cloud will go and go and go, he concludes. And it won't be because Autodesk talked someone into it.

Here are some coments from media people on Twitter:

Rande Robinson: Don't forget the Canadian provinces are are Bentley users too

Sean Dotson: Autodesk at Burning Man. I want to see that expense report.

[press F5 to refresh your Web browser with more coverage]

Posted at 01:58 PM in Travelogues | Permalink

Thanks for blogging it Ralph, reading it from Middle Earth.