It starts off with a dashboard that shows all of your firm's projects. Next, a sandbox lists just the work you are working on. Files are dragged and dropped into the product; the format does not matter, as it gets translated automatically.

Fusion 360 runs on PCs and Mac, and uses both local and cloud processing. The cloud, for example, does the translation and generates thumbnails for the dashboard. As you do your work, Fusion 360 creates snapshots of the design, making it searchable; this allows you to see what a design progressed the way it did. 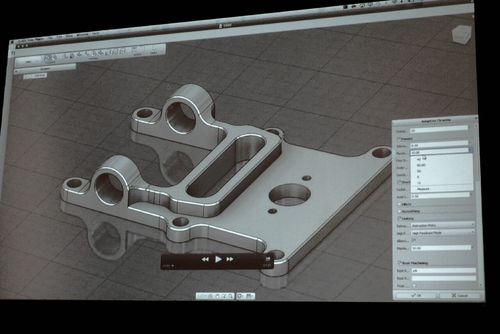 The modeling environment is vaguely like recent releases of Inventor. In the demo, we see how the model is a mix of surface and solid models. Only four commands are needed for most of the work. To add geometry, hold down a hot key. T-Splines is used for working with shapes interactively -- for doing the sculpting. You can change the faces of solid models, without having to change modes as in AutoCAD (where you have to enter separate commands to convert models between solid and surface, and then not always successfully).

Translation in and out, lots of formats, like STEP, Pro/E, SolidWorks, etc. Fusion 360 uses the same f3d format as Fusion for Mac. The software is now in beta, and you can sign up to request a beta test of it at http://usa.autodesk.com/adsk/servlet/pc/index?id=20884205&siteID=123112#form2 . 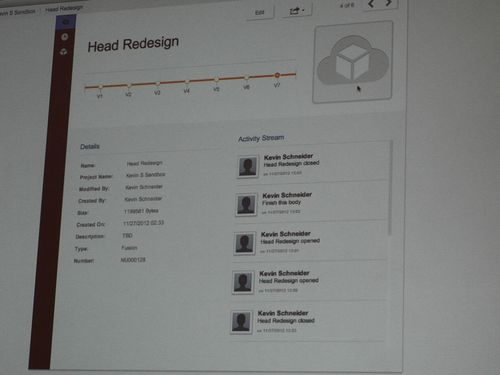 The timeline function in Fusion 360

It will become available in Spring 2013. It occurs to me that Autodesk pulled off in a couple of years what Dassault has been working on for five (SolidWorks V6). Autodesk customers can try out the new Fusion 360 software, while nobody still has no idea what V6 will run like, except that it uses Enovia V6 as its "file format" (database).

Roopinder tara: Who is this for?

A: Small businesses, small consultants, and some large firms are checking it out.

Evan Yares: How much of it is threaded?

A: ShapeManager runs both remote and local, and we can throttle how much is delivered to the client from our end.

Ralph Grabowski: You mentioned that it can work with CAM and other software. How does this work?

A: Through file translation, which is done of the cloud. We support many CAD and neural formats.

Ralph Grabowski: How long have you been working on Fusion 360?

A: We have been working on this for several years. Parts took us a year, the multi-threading of ShapeManager took three years. 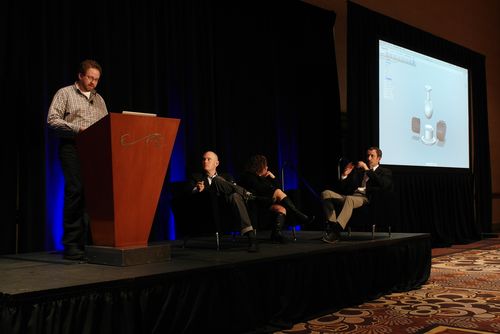 Posted at 02:15 PM in Travelogues | Permalink

By far the most interesting item mentioned is that Autodesk ShapeManager is now multi-threaded. While this is interesting, what's really needed are direct comparisons to other history based modelers like SolidWorks, Solid Edge or Creo Parametric which don't offer full multi-threading.

A direct comparison is the only way to know what the true, real world performance increase might be.