Alright, here we are at 3D Insiders' Summit 2012 being put on by the Spatial division of Dassault Systemes. My head hurts, because we are in the casino-resort town of Black Hawk, about an hour's drive west of Denver Colorado. The head hurting part comes from being at 8,500-foot elevation (2,600m). We been warned to move slowly and drink lots of water to overcome the reduced oxygen and reduced humidity.

Poles apart from where I was exactly one year ago. Manila Philippines is so humid that mildew and ferns grow on building walls; it's located at sea level; and 15 million people are jammed onto its roads and sidewalks. Here in Black Hawk, the roads are empty, because you're supposed to be indoors, gambling.

This summit is a gathering of Spatial employees, third-party developers, and three of us from the CAD media -- in total, about 100 here. (Disclosure: Spatial provided me accommodation, meals, and some corporate gifts.)

Right now we are listening to Garth Coleman, who is director of strategy for 3DVIA. (At Dassault, every name has to be capitalized; some are actual acronyms like 3DSWYM, the rest are names, like 3DEXPERIENCE.) He's taking us through the ability of this software, which seems to me like a super-duper version of Navisworks. 3DVIA handles massive data sets from all kinds of sources (even terrain data and video streams), and then generates renderings, movies, and interactive thingies. It has a programming interface, and an API for connecting to external devices, like Kinect. "We are not a CAD kernel; we are an experience kernel."

He sums up, "If your product had a Play button, what would it do?" 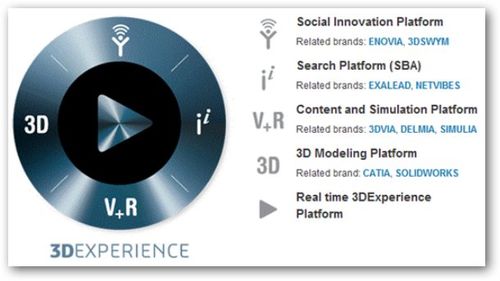 Now the topic switches to the cloud, which isn't free -- even though it seems to be. The rest of the cloud presentation is an introductory talk on "What is the cloud." Until he gets to 3DVIA Cloud, which provides cloud hosting for programs like 3DVIA Scenes, Live Marketing Apps, Mobile HD, Composer Play Pro, eDrawings Pro, and Visual Compare -- as well as third-party apps.

What about a mobile app? Not yet; there are some tough constraints on getting stuff to work on these small devices.

Coming up next: the chief operating officer of Spatial, Jean-Marc Guillard.  He gives us an overview of the aims of Spatial, such as helping the customer be innovative.

During the break, I met with a CAD vendor who will be announcing a full CAD program for tablets next month. Well, not full CAD, but ahead everybody else (whose products tend to be redliners, at most). We'll be getting a look at it later during this conference.

The break is over and we are hearing from Spatial customers who use ACIS, InterOp, and other software, such as BuildIt of Canada and ZWCAD of China. 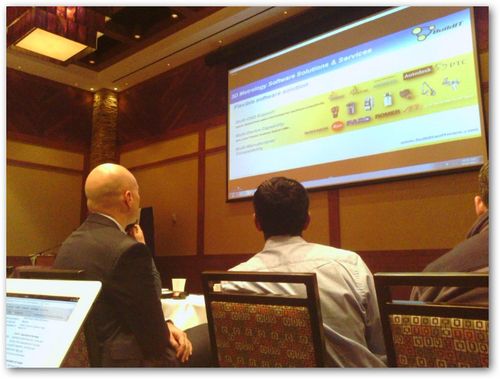 What's New in 3D Interop R23 and Beyond

InterOp is Spatial's translation system, and today we are hearing about what's new in release 23, as well as future releases. It has enhancements for importing product structures, geometric data, and PMI (product manufacturing information). Applications using InterOp R23 can now extract tessellated data and graphical PMI from CAD files.

For instance, InterOp now directly translates from competitor Parasolid, non-competitor SolidWorks (which uses Parasolid -- it's a complicated relationship), competitor Siemens NX, and non-competitor Catia V6; it reads and writes Dassault's 3DXML with tesselation. It extracts graphical data from CAD programs like Solidworks, and then display it -- although it is not clear to me what this last item means.

OK, now I get it.  "Graphical data" means that the imported 3D model looks just like in the originating CAD system, completed with shading, rectangular boxes at the ends of leaders, arrowheads, and so on.

"We want to the world's leading translator when it comes to Solidworks," a surprising admission.

Translation companies run in a hamster wheel in trying to keep up CAD vendors changing their files formats "Every year, at least one of the five CAD vendors we support does a major change to their file format." This year, it is Creo 2.0 from Pro/E, which now handles simplified representations, hidden entities, and better fillet surfaces.

(Only major MCAD not supported right now is Inventor 2013.)

What's going to be new in R24, the next release:

"You cannot buy even a laptop anymore that is single-core; our software should not be single-core." And so R24 gets multi-threading. Look for it in June 2013.

Posted at 10:11 AM in Travelogues | Permalink