Exclusive Q&A: What it means, now that Bricsys bought IP from Ledas

Eric De Keyser, the cheerful yet intense CEO of Bricsys had promised me that there would be big news at his company's kind-of annual developer conference. I already knew about Bricscad V12, having worked with the beta and its direct modeling, constraints, and parametric features.

Days before the event, he slipped me the news that the parent company of Bricsys (Menhirs) had purchased the source code for all of the software products from Russian developer LEDAS. You can read the press release here: http://isicad.net/press_releases.php?press_num=14702.

(Update: David Levin writes on his blog why he sold the IP to Bricsys. Read LEDAS enhances its key business in service after selling its technologies to Bricsys at http://levindavid.blogspot.com/2011/10/ledas-enhances-its-key-business-in.html.)

The related press release quotes Mr De Keyser as saying, "We intend to use the new technology to extend our reach into the AEC and the civil engineering markets" -- in addition to the MCAD market that the company tentatively stepped into with last year's Bricscad V11 Platinum. 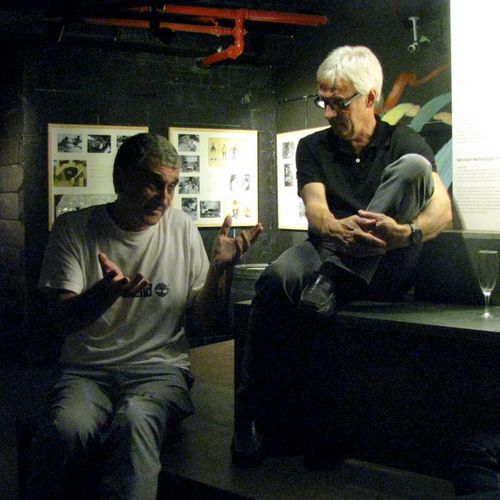 So what is the practical effect of this agreement? I had the opportunity to interview Mr de Keyser of Bricsys and David Levin, co-founder of LEDAS, the night before the official announcement was made in Brussels.

Here is my paraphrased transcription:

Ralph Grabowski: Why did you buy this software from LEDAS?

Erik de Keyser: We felt we had to, before someone else did. We wanted to make sure that the software would continue to be available, and not be locked up by someone else.

Ralph Grabowski: This tells me that there were other bidders for LEDAS IP.

David Levin: [Mr Levin declined to reveal names, nor would he say if in fact there were other bidders.]

Ralph Grabowski: What did you buy, just the retail software?

Erik de Keyser: No, we got all of the software made by LEDAS, including APIs.

Ralph Grabowski: Does this acquisition mean that Bricsys is getting into the add-on market for SketchUp and Rhinoceros?

Erik de Keyser: Not at all. We will continue to sell these two plug-ins, and if anyone wants to buy them, then that's great. But we have no interest in SketchUp or Rhino. We concentrate on Bricscad.

Ralph Grabowski: Does the new ownership have an effect on ODA? [Open Design Alliance licenses the parametric constraints code from LEDAS on behalf of its members.]

Erik de Keyser: No, it has no effect on them. ODA simply arranged a license [for LGS 2D] with LEDAS on behalf its members. Instead of dealing with LEDAS, they now deal with us.

Ralph Grabowski: How will that work from now on? I mean, say Graebert wants to license LEDAS Geometric Solver 2D. Who do they deal with? [It is important to note here that I am simply using "Graebert" as an example, for they are perhaps the primary competitor to Bricsys. I have no knowledge of Graebert's intentions.]

Ralph Grabowski: And who do they pay?

Erik de Keyser: Us for the license, and then they pay LEDAS for implementing the code in their software, if necessary.

Ralph Grabowski: Why did you sell your software to Bricsys?

David Levin: [It would appear that LEDAS determined that they are not the best at marketing software to end users. They will now concentrate on their long-term outsourcing contracts with CAD vendors, something they have been very good at now for a more than a decade.]

Ralph Grabowski: [The Russian programmers working on this software get to stay in Novosibirsk in a new subsidiary called Bricsys Technologies Russia.] Where will the new Bricscad Russia office be located, in the same building as LEDAS?

David Levin: They will rent space in our office.

Erik de Keyser: I have no problem with this, since it makes sense that the two groups have to consult with each other.

Ralph Grabowski: [Dmitry Ushakov will move from being CEO of LEDAS to CEO of Bricsys Russia.] Who will be the new CEO of LEDAS?

David Levin: This is not known as this time.

Ralph Grabowski: [Mr Ushakov took over from David Levin as CEO earlier this year.] This means LEDAS will have three CEOs in one year.

From the press release: "Dmitry Ushakov will remain a member of the LEDAS Board of Directors, a entity separate from Bricsys Technologies Russia."

As a result of this acquisition, Bricsys will now has two development teams in Russia: (a) the new Bricsys Technologies Russia office, which will be staffed by some former LEDAS programmers; and (b) LEDAS, whose own programmers will have always worked on Bricsys software.

My answers in Ralph's post look too brief although I definitely remember that I pronounced much more:). Some more comments could be found in my post http://bit.ly/q1Y1c4 .

I was recalling the conversation from memory some 12 hours later! It is helpful that you also explained your reasoning at  your blog.