« foto of the sunday: life goes better with Pepsi | Main | Here's the entire transcript for this morning's Vectorworks 2012 Q&A chat »

It took about 16 minutes, but the stream is finally flowing for the Vectorworks 2012 Webinar, through an unsupported Web browser...

The intro video tell us "the Vectorworks group" has 300,000 customers. The Vectorworks software uses the Parasolids modeling kernel, unlike any competitor.

Ug, getting a push on buying their Select subscription service. Apparently, half of US customers are on it.

The number of Mac users has increased by 17% in recent years, but we aren't given the Windows/OS X customer split. Update: Sean Flaherty writes, "We have cross-platform licenses so it is a fluid answer, but we're slightly more than half Mac overall."

Vectorworks is expanding BIM from just documenting the building, to include GIS -- "inside and outside the building." GIS is new to Vectorworks 2012.

US sales are up 40%, but of course that's coming off a recession.

He's introducing us to the 100 new features, such as auto working planes, push-pull, and 3D dimensions; Architect has referencing of named stories; slabs and so on can span floors; a new way to apply materials; and better OpenGL support.

It turns out that the keynote was pre-taped (no surprise) and that the press Q&A was at the same time in another part of the Webinar environment -- non-linear, as it were. Members of the media are complaining, "It seems odd to have the Q&A running before we've had a chance to see the presentations."

Hmmm... the free-for-all Q&A is turning into a disaster as questions get asked, bu the answers don't appear until much alter in the conversation stream. Anarchy sucks, man, like totally. I've posted a screen grab below; sorting out the Qs from the As is going to be too much work; sorry folks. 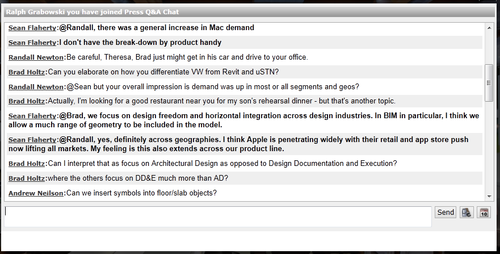 Posted at 10:20 AM in Travelogues | Permalink