If you wondering what SolidWorks Cloud will look like, we've got pictures (of the next best thing)

After the SolidWorks Cloud marketing fiasco of the last year, nothing was shown from the  main stage at last week's SolidWorks World 2011. Nothing! The only time it got mentioned was when new-CEO Bertrand Sicot promised that there would be always be a locally-installed version of Solidworks (*koff* as long as there is a demand in the market *koff*).

(I'm starting to wonder if nothing was shown because the project is hugely delayed. Last year, ex-CEO Jeff Ray said he was showing us the result of three years' work. In a recent interview, it sounded like there was another year or two to go. Four years in development, maybe longer. That's a long time in this world where components make it easy to cobble together a CAD system. As comparison, AutoCAD Mac took 18 months to be ported to OS X.)

When you look at Live Buildings, you are looking at SolidWorks Cloud.

During the demo, I snapped many pictures in rapid succession. From examining them, I've found the following user interface elements.

First thing to notice: no ribbon. Instead, LB sports the traditional menu bar. 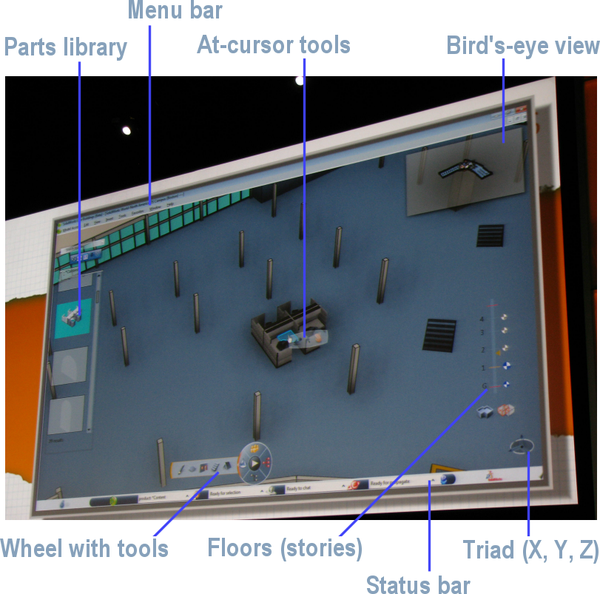 Second thing to notice: all modeling is done in a fully rendered environment, with simulated shadows.

Parts Library -- lets you drag and drop pre-build parts (aka blocks, cells, components) into the drawing.

At-cursor tools -- small toolbar appears at the cursor from which you select relevant tools.

Bird's-eye view -- shows an overview of the entire drawing, in a semi-transparent rectangle.

Wheel with tools -- is the primary user interface, from which toolbars jut out when you select a segment on the wheel.

Status bar -- is like a communications center (more later).

Triad -- shows the xyz orientation in 3D space. We saw another program that had a miniature version of the model at the center of the triad, and I expect that feature to migrate its way over.

Here is a close-up of the menu bar:

Here is a closeup of the wheel:

Here is a closeup of the status bar:

Ready to Search -- might use the French search engine that Dassault recently acquired.

Ready for Selection -- I wonder if this provides a variety of selection modes, such as by geometry, by properties, by owner, by location?

Ready to Chat -- for communicating with other users on the project.

Ready for Propagate -- I think this is for updating the master model with changes made locally.

Since Dassault's heritage is in history-based modeling, LB sports a feature tree. 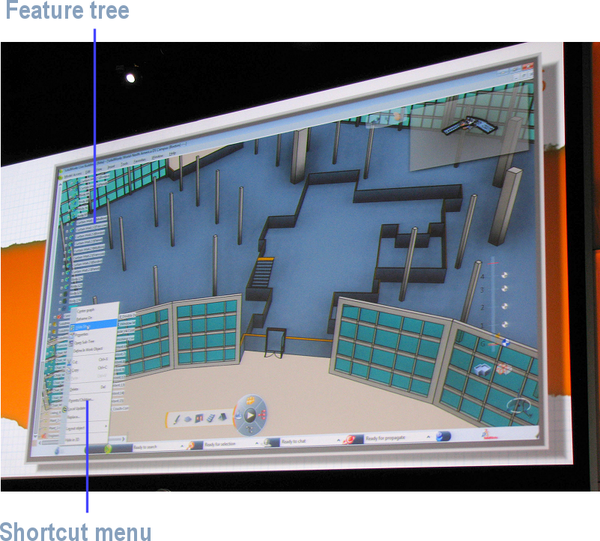 2D drawings can be placed, in this case from DraftSight. The 2D floorplan can be used as a guide to place 3D components. 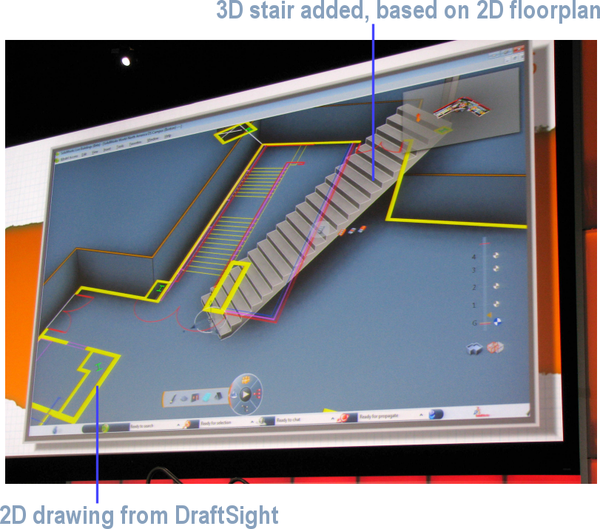 Since LB is meant as to be for conceptual architectural planning, it includes energy analysis through sun studies and so on: 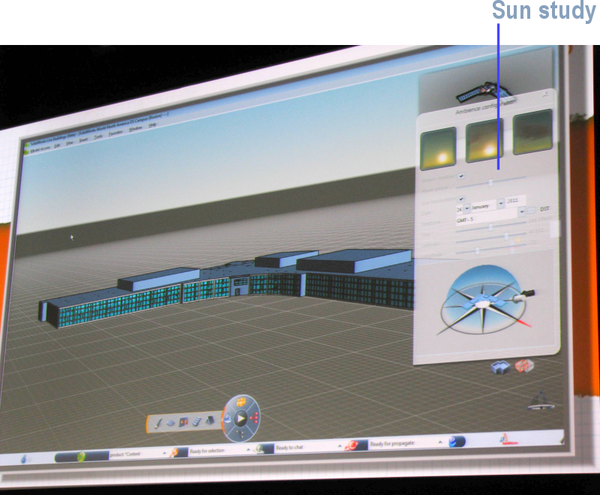 Other data sets will be added later, such as zoning regulations.

Thanks for posting this. This is a nice preview.

I hope that's not really a history tree for the structure. Not only would such a thing not scale to larger projects (can you imagine how ginormus such a thing would get for a skyscraper?), the whole concept of a history tree for structures would be hugely limiting. Not being able to relocate pilings because of a dependency in the third stall of a bathroom on the 43rd floor would get old really quick...

A typical architectural data set for a non-trivial project will include dozens (hundreds for large buildings or a campus) of different sheets and views. These will include things like wall sections, construction details, interior elevations, floor plans, ceiling plans, piping and HVAC layouts and schematics, fixture schedules and so forth.

'Parametric', in the context of AEC, means less about what happens with the 3D elements than it does with what happens to what mechanical people would think of as the sketch elements. The desinger drives the shell, structural elements, and floor plans with dimensions and relations, while the walls and other 3D elements are constructed automatically from the styles that are assigned to them.

Ralph, thanks for that post. I've published russian translation on

Anna: thanks for pointing out the Catia V6 base. DassaultWorks didn't, unfortunately, shows us Catia, but LiveBuildings only.

Ralph, the UI is CATIA V6. UI frame is ENOVIA V6 / 3DLive. The framework was introduced about 3-4 years ago. http://www.youtube.com/watch?v=m0-Y3yzNQZQ&feature=mfu_in_order&list=UL. Best, Oleg

Then, SolidWorks should have shown Catia V6 a year ago; probably would have made things less traumatic for them and their customers.