« Trying out nanoCAD 2, beta 2 | Main | foto of the sunday: after the last power plant closes »

Desktop Engineering charges CAD vendors $3,995 (see update below) to be featured as their "DE Pick of the Week." Well, that's the list price; in these economic times, deals abound. 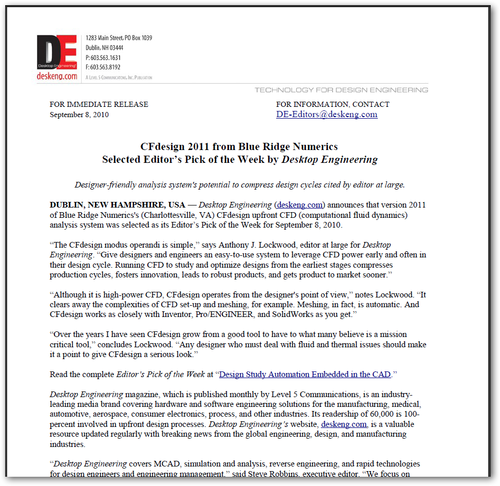 They also get an enthusiastic article written by Tony Lockwood.

Neither the press releases nor articles state that the editorial endorsements are paid for by vendors, and so do not constitute the independent opinions of the magazine's editorial staff.

In the publishing business, this is known as "advertorial," where seemingly-independent editorial writing is paid for by vendors. User-oriented magazines don't run advertorials; semi-honest ones include a header stating that the editorial is paid-for advertising.

(Another industry term is "pay for play," where a vendor will not even get a hearing from the "journalist" or analyst, unless that cheque is passed across the table first. I've heard of amounts as high as $10,000. Makes my offer to vendors to purchase reprint rights for $250 seem like children's toy money.)

In addition to Desktop Engineering, another magazine that makes extensive use of vendor-written articles is the German-language AutoCAD Magazin. During my last year with CADalyst magazine (1990), the publisher ensured that advertorials made up the bulk of the December issue -- much to the disgust of us in editorial.

The problem with these magazines keeping their vendor-driven editorial secret is that it besmirches all publications, including user-oriented ones like upFront.eZine and WorldCAD Access.

At www.deskeng.com/pick-of-the-week you can view the list of vendors who ponied up the $4,900. Is this what Mr Lockwood means when he ends his articles with "Thanks, pal"?

In the end, my rant won't matter, because most readers don't care, and neither do vendor-oriented magazine publishers.

An editor from England reports:

Apparently, in the UK at least, what DE do is illegal. Very illegal indeed. I knew it was ethically wrong, I didn't know the law courts agreed.

Keep telling it like it is Ralph. That is where quality is defined!

Many years ago, fresh from college with a journalism degree, I took a job working as an editor of a small town paper. About six months in, the publisher started promising advertisers “company spotlight” articles in exchange for additional ad placements. It made me sick passing this junk off as news. I figured if I’m going to write this nonsense, I might as well get paid better so I went into marketing. It’s nice to see that there are still a few out there with some journalistic integrity.

As a vendor, I've been approached many times by DE for their Pick of the Week, and it was always quite clear that it was pay for play. I never took them up on it. I figure anyone who cared was well aware that this stuff was all about who paid and not which products are actually the most interesting/promising.

Ultimately, the problem is that the CAD space doesn't have a magazine that can actually charge subscribers -- it costs a lot to print those glossy mags, and all that cost is borne by the vendors. It's the same reason we can't get an honest product review or comparison. The mags are too scared to lose advertising dollars if the tick off any vendors.

Blogs like Ralph's and Deelip's are taking on a more important role, but I'd bet that their readership still pales in comparison to the subscriber count of the various print mags out there (of course, who knows if anyone reads the mags that show up in the office for free).

It's a shame that users of CAD/CAM and the like don't have a good resource to go to for real, unbiased, and critical reviews of products. Imagine buying a car without Edmunds, Consumer Reports, Car & Driver, etc. We'd all be driving what the car company with the biggest marketing budget was selling.

That list contains more than a hundred examples of the Pick of the week. At 4,600 a pop? Assuming that's list and assuming reality is 50% of rate card, that's nearly a quarter of a million.

This really lends credence to the idea that "print" journalism is becoming more irrelevant as time goes on to be replaced with blogs authored by actual users. I like DE and have to admit that this was the last publication besides Develop3D that I regularly read. Pick of the week however just became a candidate for the trash bin and probably will also be followed by DE. It is just to much time and money to buy and then learn software to take a chance on being misslead by false editorials.

Keep up the good work Ralph, you have saved some of us from false advertising and the waste of our money.

I bought advertising for PTC's Pro/ENGINEER product line in the US from 2003 to 2007. This was never part of any written contract or verbal agreement we had with DE at that time. PR worked the relationship with Anthony and Marketing worked with the publisher. I have not seen this new pay-for-play thing that you are referring to above and am surprised to hear that it might exist now, but Anthony Lockwood has always been a stand-up guy and straight-shooter in the time I have known him.
In fact, in my experience, while I am sure that publishers put pressure on editors to increase coverage for big advertisers, I cannot think of a single time that I have ever been promised coverage for placing an order with any MCAD pub.
Also, advertorials are advertorials, usually you can spot them a mile away. The hint is "ADVERTISING" printed at the top of the page.

OK I went and looked again at the "Pick of the Week" I recieved today and no where does there appear any mention of advertising or the article being an advertorial. Maxthon is the browser I am using and unless your browser is showing something different than mine Ralph is entirely correct. There is no "advertisment" hint at the top of my page and as far as I am concerned Ralph has represented this fraudulent practice correctly. I unsubscribed today and can't imagine what they could do to restore faith in their words where I am concerned.

Tom, it may help to note that a printed magazine lives for a month or max two. A blog post lives forever. I often receive comments to my blogs posts written years ago. For the reader it is brand new information. The number of people who read a blog post on the day its published is just a mere fraction of the number that will read it throughout its infinite lifetime.

Thanks for revealing vendor-driven editorial secret!

I think every CAD Vendor can easily afford to pay $4,900 for 'pick of the week' to reach 60k users.It saves their time and money to reach users.I think it benefits more to Vendors. Every vendor is getting chance to showcase their product so its up to users to select which software to go for.
Even before reading this article I use to like other articles on CFD, CAE, MACAD more then the 'pick of the week'on DE!
The articles on DE are free for subscribers, users so I don't feel charging vendors is wrong. But better if they mention about it next time and select product that's really worth to be pick of the week.

Illegal, eh? Excellent! Somebody pass the popcorn, this is going to be entertaining to watch.

If your claims are true, this puts Design Engineering and others like it in direct violation of the US regulation FTC 16 CRF Part 255, where full disclosure is required in a clear manner.

Just one note on this: I think they recently started this pay for play (some time this year). In the past, we have been mentioned in this area and I can assure you that we did not get approached to pay for that spot. However, this year we did get approached with the cost to be mentioned and we opted out. I'm glad to see that you mentioned this here but keep in mind it is a recent change.

Cary, I was getting these offers at least as far back as 3 years ago, and I think beyond that as well. They appear to be selective in their pricing of the "sponsorship" for the pick of the week.

I am no spokesperson for DE but you guys don't have the facts quite straight. My company, Blue Ridge Numerics, has received this editor's pick of the week at least 3 times and NEVER did we pay for it.

Here is the process as we've experienced it: Tony Lockwood makes his selection and then the ad sales person contacts us to let us know. We are then offered a chance to "sponsor" Tony's pick which entitles us to receive the leads generated from the e-newsletter and the DE web site. I think in all 3 cases we declined to buy the leads, i.e. pay DE a sponsorship fee, and it had no ill effect on Tony's selection of the week. In all 3 cases DE publsihed Tony's pick even though there was no sponsorship revenue.

For what it's worth..

CADDIT has received numerous offers from field "experts" both in Australia and abroad to engage their airtime and keyboard - at a price. The paradox is, we don't need more advertising, we only need genuine feedback and appreciation from those that we work with. So, regardless of the law in this land or that, I am so glad that CADDIT doesn't get involved with this kind thing...