OK, so here we are in Seattle -- rainy Seattle -- on the second floor of the Edgewater Hotel, named so because it is on the edge of the water, literally, being build on a pier jutting out in to the Pacific Ocean. One of the highlights of this hotel is that guest can go fishing from their room balcony. Another highlight was the great lunch served -- salmon, naturally.

The seminar is just starting. It is sponsored by Lattice Technology, Elysium, and Kubotek. Lots of Boeing people in attendance. Over lunch I met a fellow with Alto Aviation, who installs entertainment systems in private aircraft. Currently, they tune the sound for each seat by manually tweaking analog components, but they are working on a digital system that does it more automatically.

The main concern at our lunch table was Adobe's apparent abandonment of its 3D translation software. Everyone at the table uses the software, but with new releases of CAD software emerging, the xlators aren't being updated by Adobe -- leaving these guys in a lurch.

We're getting a brief visual history of Boeing aircraft...

Just shown a picture of the still secret Boeing 888. This dramatically new design coverts the main body into a giant jet engine, with two passenger and cockpit pods hanging below the wings where the engines normally go. We'll be required to sign an NDA later to cover this photoshopped model.

(Turns out I am the only non-Boeing employee here. Wish I could get paid to attend seminars!)

Rick Zuray is technical principal at Boeing, and he is going to talk about MBD, the emerging standard that does Model-Based Definition. MBD is the third generation:

Gen 1. 2D
Gen 2. 2D and 3D, but 2D being the FAA authority
Gen 3. MBD is parametric and relational design, with PMI (GD&T and annotation) replacing 2D drawings. Everything needed to build an airplane is contained by MBD.

Boeing first implemented MBD partially using Catia V4 on the 767 and 777 aircraft. They were able to prove to the FAA that MBD could provide the data as required. By eliminating 2D, Boeing saved about 40% in drafting costs by going just with 3D. Naturally, it was a transition, slowly eliminating 2D stage by stage. Now a typicaly drawing take 60 hours, down from 105.

He's done listing the benefits to going all-digital; now the drawbacks. The primary problem is archiving CAD data in its native format. They used to expect ten years between major CAD upodates, but are unhappy that Catia is now down to 3-5 years.

The FAA's biggest concern that engineering intent is available 70 years from now -- not just the limitations of media. Mr Zuray is saying that old data tapes have to be retensioned every 5 years. Every bit of Boeing data must be preserved, and Boeing is now up to 50 years but hopes to reach 70 years archivability.

He is now describing how Boeing worked with FAA (US federal aviation administration) to agree on how to store drawings digitally. The FAA wants the data to be accurate but also efficient.

(It's proving to be a challenge to take photos of the slides. The camera's viewfinder shows the screen as red... green... blue... Depending on when I press the shutter, some text goes missing, depending on the background color. I've switched the camera to take black-white photos.) 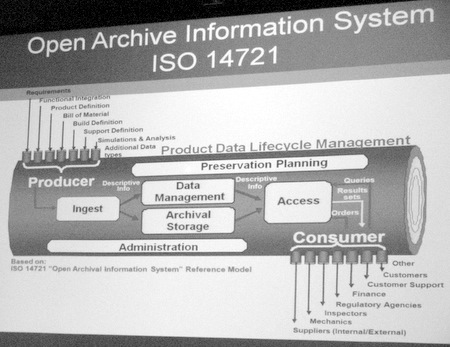 Boeing has created a repository system that ensures what ever data is entered can then be retrieved in the same way up to 70 years later -- with no data loss. Problem is upfront: you have to ensure that the data that gets created can in fact be stored "if you want a successful implementation," adds Mr Zuray.

Boeing hopes to be completely digital by 2012. FAA wants all aircraft manufacturers to agree on one set of standards. Boeing prides itself at storing too much information, but recognizes it needs to become more efficient -- there can be too much data!

Now describing LOTAR, the Long Term Archival and Retrieval of digital data. Shipbuilding and nuclear industries are interested in what the airplane companies are doing. A Boeing employee asks, "Where does electrical fit in?" Planning to start working on that.

They use STEP. Advantage to open standard (neutral format) is that it does not change as often proprietary standards. Problem is that there are gaps, such as electrical data.

Now we are switching over to the three software vendors. Elysium specializes in data translation; KUbotek in 3D CAD software that reads any CAD data; and Lattice Technology in storing 3D data.

Abdul Shamaa of Elysium is talking about multi-CAD environments; he was formally with SDRC and Siemens PLM Systems. They do anything to do with CAD data exchange; head office is in Japan.

He'll talk about data compatibility, quality, usability, and management. Much of the difficulties he describes in translating 3D models reminds me of the problems I uncovered between AutoCAD and MicroStation 15 years ago. Some things never change!

Biggest problem in translation is that CAD systems use different tolerances. NX is 0.0254mm but CATIA only 0.1mm. What is closed in CATIA is a gap in NX.

Also: different ways to closing cylinders, tri-corner fillets, poor design practices (such as unintended design elements), and how geometry is defined mathematically -- as well as software translation errors. Elysium figures their software is pretty good, since they have been doing this for 25 years, as well as actual APIs provided by the CAD vendors.

Time for the mid-afternoon break. "Caffeinate and sugar up!" says the host.

OK, we're back. Bob Bean is taking the Kubotek portion. "Measure twice, cut once" is his theme in dealing with CAD data that gets used by machines directly -- cutting machines, lathes, etc.

Kubotek is only firm using geometric-based validation -- everyone else uses points-based inspection, which inspects at discrete points, missing errors in between (unless they use an infinite number of points).

Old way to check design changes is to overlay two models with 2 colors, and look for differences. New way is to compare geometry, determining two states of each part (old and new). This also documents the changes.

Translation errors are the suppliers problem to fix, down to a thousandths of an inch. (The F-35 jet weighs 3,500 lbs too much, and so there are tons of ECO engineering change orders to reduce the weight sufficiently to land on aircraft carriers.) 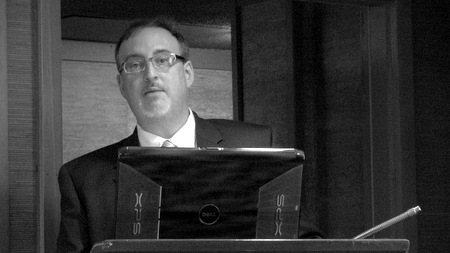 Bob Bean at the podium.

(Whew! This seminar room is getting too warm...)

We're hearing about Lattice Technology's range of solutions. They have a half million people using their highly-compressed files, viewers, and publishers.

I've always been amazed at their compression rates -- 0.5% or better! He's now showing a 10,000-part 1.6 gigabyte model that takes up just 5.3 megabytes in XVL. One way they get this compression is by looking for repeating information -- like identical bolts. But they also add information, such as data missing from known bolts.


Well, we are done now. Pretty interesting stuff, but then I've always found translation problems fascinating. More coverage of this seminar in next Monday's upFront.eZine .

Posted at 01:19 PM in Travelogues | Permalink

Ralph interesting and timely (at least for me) I work for a state DOT and we are finally, taking a serious look at going "total electronic and 3d". Like Boeing we need to retain data for a long time (and unfortunately linen, mylar and paper seem to work best). I hope Boeing comes up with some good solutions.

Really like the BW photos gives the article that "old time engineering feel".

I used to work for a small custom products manufacturer, with delivery times scheduled in weeks, rarely months. Doing hundreds of projects every year, and we kept dwg archives for only 7 years. Of course that was before going electronic.

BTW I'm surprised that CATIA tolerances are so low...

Hi Ralph, Great coverage as usual. Just a clarification the F35 is only 1,200 lbs overweight not 3,500 lbs - still requiring a lot of changes that need to be made!