The second day of COFES 2008 began with the keynote speech by Karl Ulrich, a CIBC professor from Wharton. He spoke about his upcoming book, Innovation Tournaments: Creating, Selecting and Developing Exceptional Opportunities. Basically he described an approach to pick the best idea for a business venture from a list of ideas.

There were some enlightening aspects, but it seemed to me that everything else was more or less simple common sense -- with the addition of a litany of charts, graphs, diagrams, and statistical analysis jargon. I always have a problem with overdoses of charts and graphs, and so maybe that’s what turned me off. 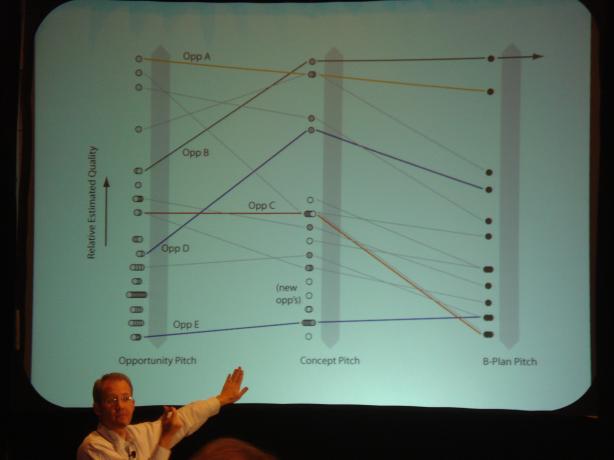 After the keynote, I attended the Autodesk technology suite briefing. A technology suite is basically a hotel room where a sponsor gets to present a few ideas to as many people who can fit into that room. The Autodesk suite was pretty much sold out. 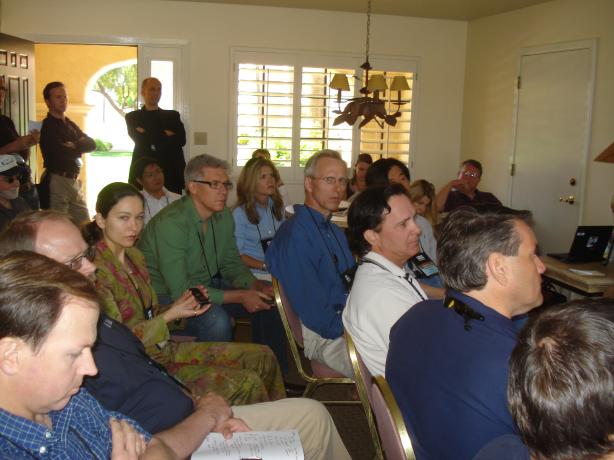 Buzz Kross, vp of Autodesk’s Manufacturing Division, explained his vision for digital prototyping. I have heard about digital prototyping for a while now, and was interested in hearing it from the horse’s mouth and, if possible, question the horse as well. Buzz mentioned a few things about Autodesk first, calling it the largest CAD company that spends $150 million annually on R&D. (I wondered, with a budget like that, how come AutoCAD 2009 isn’t very different from AutoCAD 2000. When was the last time a concept as radical as layers or blocks was added to AutoCAD? I hope they are not spending all that money to make fancy things like non-rectangular viewports and pretty interfaces.) Over the next ten years or so Autodesk will acquire companies that have technologies that will aid in giving Inventor the capabilities of digital prototyping.

So what exactly is digital prototyping? From what I understand, it's solid modeling + other features that validate, improve, test, etc. the solid model. A simple example would be a finite element analysis module what works inside of Inventor. Which begs the question, how is this different from what is being done now in other CAD systems?

In response to my question about varied user interfaces between their products, Buzz mentioned that Autodesk was working on something they are calling "Airmax" -- that’s AutoCAD, Inventor, Revit and Max. No, it’s not all of them wrapped into one (what an organized mess that would be!). It is something to do with giving each program a unified user interface. It looks like some of this is already in AutoCAD 2009, for I doubt they spent all that time and money on AutoCAD 2009's ribbon interface, only to drop it for something else soon. And as I type this, I wonder why Maya isn’t part of Airmax?

Later in the day, there was a program called "Maieutic Parataxis." (Maieutic means the midwifery of knowledge; parataxis means the juxtaposition of ideas without connection or conjunction.) I am quite positive that the person who came up with this -- must be either Joel Orr or Brad Holtz -- must have been high on something. As it turns out, Maieutic Parataxis was several groups giving rapidfire five-minute presentations on products, services, startups, and ideas that they were working on.

One of them was Mike Riddle, and I was disappointed that he did not show his SmartNotes or Thinker products like he hoped he would in an interview with Ralph Grabowski in upFront.eZine. The "oohs" and "aahs" went to the Australian Centre for Visual Technologies and their Videotrace technology. Maieutic Parataxis indeed!

Finally, all the COFES attendees were filed into buses and taken to the Arizona desert for Evening under the Stars, a western cookout among the cacti and large telescopes to gaze at the stars. 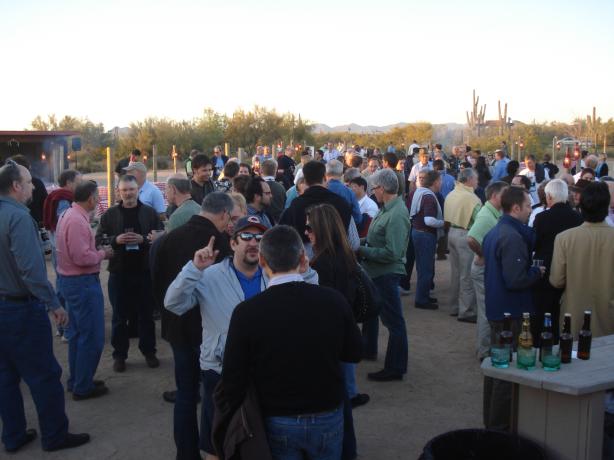 Tomorrow is the last day. I do not see another Maieutic Parataxis in the schedule for tomorrow. And I am not sure whether that is a good or a bad thing!

Posted at 03:17 AM in Travelogues | Permalink

Digital prototyping is frankly a load of marketing nonsense put forward by MCAD companies who are trying to come up with the next best marketing slogan. This has been around the houses so many times that I am astounded it gets so much "air time". Are Autodesk REALLY saying physical prototypes will be a thing of the past?

Sure in some industries the accelerated lead times requires that new ways of designing have been implemented by making use of advanced analysis - think car design here with FEA based crash tests -but here's the rub. Most companies do not have the resources of car companies. Even car companies get it seriously wrong when they go too far down the digital design route.

Why is then that some of the fastest growing small companies I know are prototyping businesses? Why is there a clamour to create 3D printers? Sure there are technologies out there that allow "physical" interaction with digital models - SensAble does a great line of products - but these are niche items. 99.99% of designers, marketing execs, accountants, investors etc need the touchy feely effect of a physical object.

But then what do I know? I've just been a professional designer working for hundreds of small businesses for the last 20 years.

In that time the only area where digital prototyping is prevalent is in objects that are physically large - eg - bigger than you can make on a RP machine. Even there the trend I am seeing is towards physical prototyping as the costs of large scale 5 axes machining comes down.

I agree, I don't think physical prototypes will ever go away. Many times after working months on a design, I receive some prototype parts and think 'Wow, this is really small in real life.' What was I thinking doing something this way or that at this size of part.

Some people can think in 3D and some can't. The world will always need physical parts for one reason or another. But I appreciate the tools I have because they allow me to get the design done faster.

Replacing physical prototyping is not much of a goal. If the digital model has enough fidelity to be considered a prototype, then "printing" the model is a trivial exercise.

If you are building something for which the physical properties are critical and since "printing" will not create an accurate physical model that you can stress test, melt or put in a wind tunnel, you need to run analytical models anyway. Pretty much any CAD system can feed an FEA system now, so that's nothing new. If you are doing advanced modeling like CFD, you will build physical models in order to anchor your analytical models. You then use your digital analyses to help you explore the design space.

What the goal should be is to enable such digital design iterations by shipping CAD systems with easy to use automation applications. Go beyond raw APIs and create actual GUI applications that allow easy scripting of parametric geometry and feeds into analytical systems like ANSYS. Such applications should run outside the CAD program and be able to coordinate processes across many machines.

And if you want a real goal: make a CAD system that takes advantage of multiple cores. The average CAD workstation now ships with 2 cores. In five years that could be 20 cores. Better start on that massively multithreaded codebase now.