Autodesk invited 115 media to attend a World Press Day to launch its 2008 line of software. The press releases shipped today made statements like "At its World Press Day event today, Autodesk, Inc. unveiled the latest versions of its manufacturing solutions..."

Um, they didn't. What we got were broad overviews of the future of design.

Starting off the event, we were told that in the old days we would be shown 322 slides of new AutoCAD features. I cheered, "Yes!" After all, I want to know the technical details. But 'twas not to be. Darn.

The day ended with a Q&A. The most intriguing answer came from CEO Carl Bass, in response to Brad Holtz asking about Autodesk's PLM. Mr Holtz noted that Autodesk is pushing BIM [building information modeling] but not PLM [product lifecycle management].

"What's my anti-PLM rap?" asked Mr Bass. There are only three companies with a PLM problem: one is Dassault, one is UGS, and one is PTC. "There is," he continued, "no company that I know who wakes up in the morning and says, 'I have a PLM problem'." They talk about PLM; Autodesk talks about 'democratizing' design. You know there's a problem, he concluded, when 90% of the cost is for consulting, and 10% for the software.

Someone else [sorry, I forget who] asked about the inconsistent user interfaces between Autodesk's software, which seemed inconsistent with the company was talking about the software working together. Response: The UIs will become more similar in the years to come, and will borrow from the UI elements found in Vista and the Office's ribbon.

The ill-with-a-flu Martyn Day asked why dealers were not horizontally integrated. If a customer wants GIS and mech, he is unlikely to be serviced by the same reseller. Mr Bass noted that customers are sometimes now ahead of Autodesk, and that this problem needs to be dealt with. 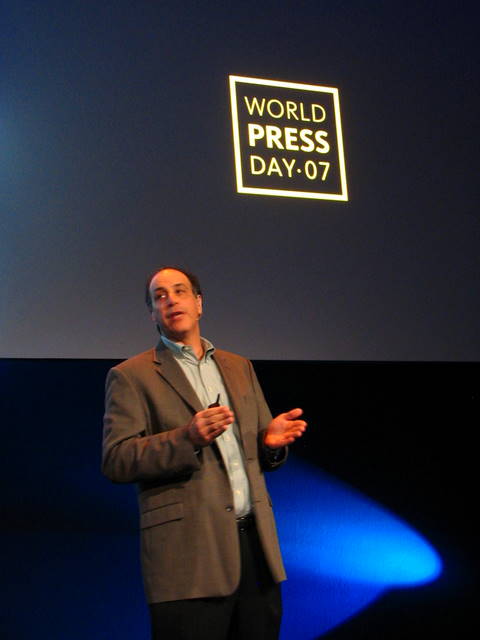 Platform and Geospatial divisions combined into one under Amar Hanspal.

The Plant Design Suite was launched couple of weeks ago with P&ID the follow-up will be Plant3D later this year, guaranteed to be much cheaper than competing products from Intergraph et al.

Future hardware (!) from Autodesk could include Touchwell, a large touch responsive LCD screen that zooms and pans 3D drawings through fingers moving across the screen. 'Nother item: BoomCAM is the easiest 3D interface ever, even if its hardware is awkward.

The CEO of HOK architets lamented that "Too often our design is informed by fashion." Pat MacLeamy also said, "In a time of change, we want to make sure we are leading it, instead by being crushed by it."

Posted at 05:48 PM in Travelogues | Permalink

Just wondering are those the car keys for a quick get away in his hands!

Was anyone brave enough to ask them why they have not posted their real figured for the last two quarters..This 20% growth thing is an act of fiction without the figures to back it up!

At this time they are consider a delinquent company!

There might be a problem with "enterprise" PLM, but any manufacturing company that does not take ECO/Version Control/Configuration Management seriously is asking for trouble.

So maybe Carl's customers aren't asking for PLM, but I've bet they've asked questions like "What version was shipped to customer X?", "Can you make/order a replacement part for machine serial number Y?", "Why did we make change Z?", etc. And, especially with electronic data (software, CAD files, etc), appropriate software sure can help. I don't think AutoDesk has any solutions here.